Cloud-based software for automating cryptocurrency trading strategy. The cryptocurrencies accepted for payment include Bitcoin, Ethereum, and Tether. However, you can trade on different

Trade Santa is suitable for both newbie and professional traders.

Cryptocurrency trading has become popular since the advent and bitcoin and the success rate it has recorded in the past decade. To succeed as a crypto trade, one does not have to depend on one’s intellectual prowess alone; technology is needed to get the best out of the market. This is where trading bots come in. One of the emerging trading bots is Trade Santa, which has made significant progress since its launch in 2018.

In this article, we will be give you Trade Santa Review. So let’s begin!

Trade Santa has the basic futures that every intelligent bot should possess to enable it trade with precision. The bot is open to everyone, irrespective of your region, as long as you are above 18 years of age. Registration is easy and requires minimal verification, though there are strict security measures in place to safeguard your funds.

Free trial is available for 15 days, and you earn 30% discount if you subscribe on any plan for a year. Also, you receive 20% if your referral subscribes to a plan. Trade Santa easily integrates with various exchanges, such as Binance, Bittrex, HitBTC, Huobi, Okex, and Upbit.

The trading bot is reliable for trading and you can also withdraw your earning by requesting for withdrawal from your account.

Trade Santa was launched in 2018 and has made some remarkable progress since then. On 14 November 2019, it took part in BlockShow Asia 2019.

Some of the other achievements made in 2019 include the addition of deal volume calculator, improved security, blog launch, new identity/site design, UI/UX improvements, large volume sell/buy tool launched in Alpha, and the addition of deal progress visualization to the bot page.

As of the time of this post, over 11,778 trading bots were already active, with more than 1.6 million deals completed using its software, and a strong community with 40,494 active users. Trade Santa also launched its Manual Trading Terminal in March 2020, which makes it possible for users to launch an order without visiting an exchange.

The registration records of Trade Santa are not available. So, it is not clear whether or not it is a registered company.  However, the Trade Santa team is also not listed on its site. So, information regarding the developers is scanty.

Trade Santa allows people from across the globe to register and use its robots. To qualify, however, you must be at least 18 years of age. Check out with the authorities in your region or country if there is any particular restriction peculiar to your area.

The support team can be contacted by email and Telegram. Its support languages include English, Turkish, and Portuguese.

Trade Santa support channel is available on Telegram, where they offer latest updates to their teeming customers, including promos and other highly useful information on their roadmap. If you have questions, you can reach them on their Telegram chat and someone would be there to answer you.

To start using Trade Santa, you don’t need any major verification. Aside from the need of signing up using your username, email, and password.

A free trial is available for only 3 days on their basic package for all newcomers. However, you can subscribe for a year and get 30% off.

Features of the various plans: 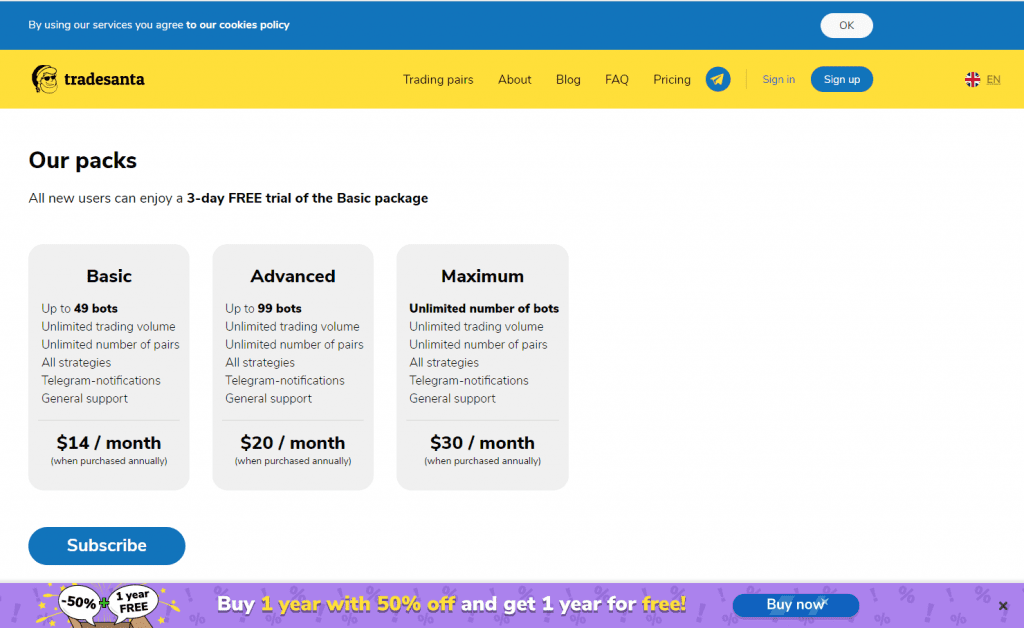 This comes with up to 49 bots, unlimited trading volume and an unlimited number of pairs, Telegram notifications, all strategies, and general support.

This comes with up to 99 bots, unlimited trading volume and an unlimited number of pairs, Telegram notifications, all strategies, and general support.

Each of the cryptocurrency exchanges has its minimum trading rules to enable the order to go through. The exchange and the pair determine the value. When setting your first order, if you use a fixed value, Trade Santa trading bot will slot in the minimum value automatically.

For instance, you can find Binance’s minimum value here:

How you can deposit the money

Different exchanges have different ways of depositing money. For instance, Binance allows you to deposit over 150 cryptocurrencies. Go to the homepage and click on your profile icon. From there, you can click on “Deposit” to take you to the deposit page. Select the coin you wish to deposit.

However, you need a MEMO if you are depositing BNB because all users have identical BNB deposit address.

How you can withdraw the money

Payments are processed as fast as possible once you make your withdrawal request. However, it may take up to an hour to a day to do so in some cases. Note that a withdrawal that is marked as “completed” or “success” on a cryptocurrency exchange or wallet is not to imply that the money has been fully processed to the exchange that is receiving it. What it implies is that there was a success in posting the transaction to the blockchain. The speed of processing may depend on the traffic on the blockchain at the time.

Once your commissions are determined, you can request for withdrawal. It may take less than an hour to a few days in a few cases for everything to be ready.

Transactions for bitcoin and bitcoin-based projects are expected to arrive on Binance by 2 confirmations. If eventually your money is not received in your account after confirmation, you should contact Trade Santa through the following channels:

All deals on the platform are transparent. There are no hidden charges on any plan you purchase.

Trade Santa bots can assist you in making a profit under predictable market conditions that are reasonable. However, nobody can guarantee you that this will happen 100% of the time as random events may take place and take the whole thing in the opposite direction. With this in mind, it is good to put some hedging strategies in place to prevent a situation where you have to take overleveraged positions with bots.

Drawdowns are possible, but with Trade Santa, this can be easily managed. You try to use the minimum trade value to reduce your risk. For the first order, the bot buys the amount of the base currency that you specified in your setting.

After executing the first order and the deal is open, the bot then places a Take Profit order alongside various Extra orders. When the crypto price goes in the opposite direction, the bot executes one extra order and then places a new order automatically. When this occurs, the take profit level is also reduced.

Currently, the only available bonus comes in the form of a discount. If you subscribe for one year, you get 30% off.

You can earn some income by referring your friends to use Trade Santa. For each plan purchase that your referral makes, you get 20%.

This is how it works:

Integration with other platforms

You are expected to set an access point, making use of the exchange account’s API keys you wish to use. To get the API keys, go to the account settings at the exchange. You ask for permission and then confirm things through email.

After generating your API key and the secret key, input them into the new access point, thereby making the bridge with the exchange possible. Ensure that you mark “read balance” and “place order” fields. Do not tick the withdraw option.

For instance, to get Binance’s API key and API secret key.

Trade Santa is available on the web interface, iOS, and Android app. You can download the app from the App Store or Google Play store.

Trade Santa has several video tutorials and educational materials you can leverage to make more profits and limit your financial losses.

Trade Santa is worth testing out since several of the users already have some positive testimonials regarding the bot. However, the bot is relatively new in the crypto ecosystem and would require that you apply it with some cautions.

We advise that you experiment first with a small percentage of your trading money to see how it works before going full throttle with the bot.

3Commas Bot Review Cloud-based trading bot for crypto traders. You can trade over…